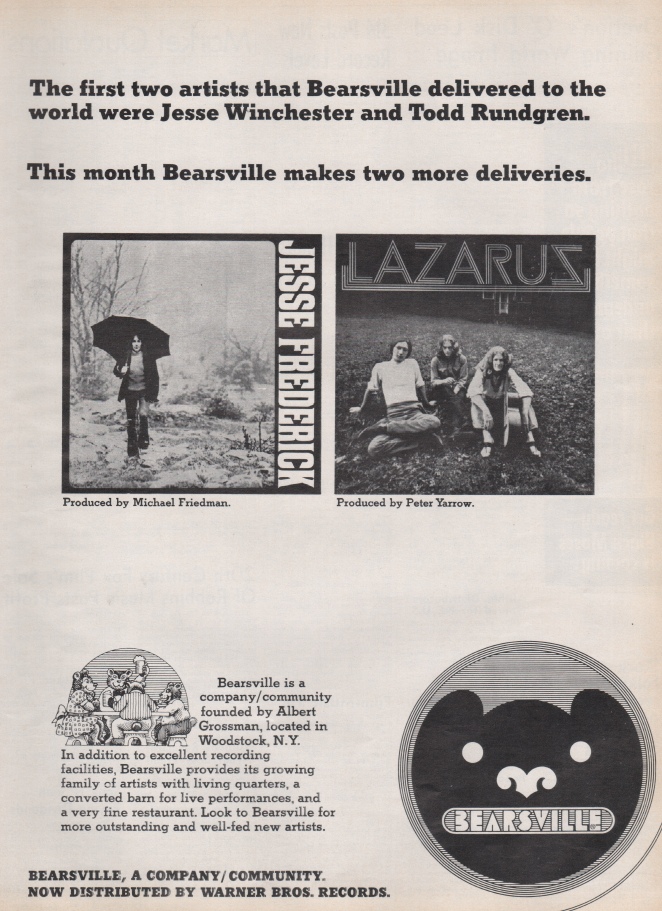 From my Small Town Talk:

Less supportive [of Todd Rundgren] by this point was Michael Friedman, who was nurturing a new Bearsville artist named Jesse Frederick. “Todd didn’t appreciate anything, and I’d really stuck my neck out for him,” Friedman says. “I think he felt that I’d deserted him for Jesse, but I stopped being interested because he was pissing people off and I was putting my name on it. He was a good engineer, but I preferred John Simon’s productions. With Todd, everything was sort of molded after the Who and the British sound, which was a much harsher sound than the funky Southern blues style the Grossman artists were involved with.”

More appreciative than Rundgren, Frederick moved into Friedman’s house in Shady and began rehearsing for an album made at the same Nashville studio where Great Speckled Bird had been recorded. 1971’s Jesse Frederick—rootsier and more soulful than The Ballad of Todd Rundgren, though hardly as original—was the first Bearsville album released under the label’s new Warners deal, while the second was a soft-rock effort by three long-haired Christians calling themselves Lazarus, produced at Bearsville by Peter Yarrow.

The third in the Reprise 2000 series—not counting reissues of Rundgren’s first two albums and of Jesse Winchester—was by eccentric Los Angeles duo Halfnelson, produced by Rundgren after he’d been introduced to them by Miss Christine. When Grossman suggested they rename themselves the Sparks Brothers, Ron and Russ Mael reluctantly compromised on Sparks, though success only arrived when they later signed to Island in London.[1]

[1] Following the 1971 release of Halfnelson, Miss Christine left Rundgren for Russ Mael, the more conventionally handsome of the two Maels. She was the subject of the Flying Burrito Brothers’ unflattering “Christine’s Tune’ and a member of Frank Zappa’s protégées/nannies/groupies Girls Together Outrageously. In November 1972 she died of a heroin overdose.