After the delightful David Kamp graced us with his presence on the latest RBP pod episode, regaling us with the story of how it took 11 years to land his 2007 interview with Sly Stone, he sent us this fabulously barmy “phax” from the former Sylvester Stewart (see below). If you can make more sense of it that we can, you’re doing well…

We’ve had some tremendous guests on the Rock’s Backpages ‘cast these past few weeks, so I thought I’d share a few of them here….

In the new episode of the Rock’s Backpages podcast, Barney & Jasper welcome the legendary Alan McGee into RBP’s virtual cupboard. The Creation Records founder talks us through his storied career, from his school days in Glasgow to the Creation 23 label of the 21st century.

Reminiscing about the early ’80s Living Room gigs he put on in London, Alan describes the signings of Oasis, the Jesus and Mary Chain another great Creation acts. He also explains how Primal Scream got from Sonic Flower Groove to Screamadelica; how he almost signed Teenage Fanclub’s idol Alex Chilton; how My Bloody Valentine’s Loveless did (or didn’t) almost bankrupted his & Dick Green’s baby; and how appalled Sony were by Kevin Rowland’s My Beauty album after the company acquired 49% of Creation’s shares in 1992.

Slightly cheekily, RBP’s co-hosts then force Alan to listen to clips from a 2007 audio interview with Alex James of Oasis’s Britpop nemesis Blur — except it turns out he never really hated those soft southern Sassenachs in the first place: it was all the Gallaghers’ fault. Quel surprise…

After paying their respects to fallen pop heroes Wayne Fontana, Trini Lopez and Seeds guitarist Jan Savage, Barney & Jasper talk through their highlights of the week’s new “library load “. These include Lillian Roxon’s 1966 report on “Music City USA” (i.e. Nashville); Michael Goldberg’s 1983 report on MTV’s exclusion of Black music videos; Joni Mitchell bellyaching in 1981 about being “written out of rock history”; a breathless 2002 review of Scandi garage rockers the Hives live at London’s Astoria, and a riveting Aphex Twin interview from 2003…

In this episode we were joined by self-professed “failed musician” and pasta-sauce mogul Loyd Grossman, OBE, to wax nostalgic about the most important years of his illustrious career: those he spent as a contributor to Fusion, Rolling Stone and other American music papers. Loyd reminisced very amusingly about seminal late ’60s shows at the Boston Tea Party, before explaining how he moved to London and reinvented himself as a British national treasure on TV and in every kitchen in the country. He also recounted how he came to play guitar, three times a year, with Jethro Tull.

After a digression on the sad passing of Fairport Convention’s original singer Judy Dyble, Loyd joined us in hearing clips from a 1982 audio interview with Queen’s Brian May in which that poodle-headed plank-spanker describes, among other things , working with David Bowie on the classic ‘Under Pressure’. I dragged Loyd into a discussion of the wrath heaped upon his compatriots the (Dixie) Chicks, whose new album Gaslighter afforded the opportunity to examine the close links between country music and hyper-patriotism. Loyd turned out to be a country fan and gives a special thumbs-up to the Chicks’ defiant 2006 song ‘Not Ready To Make Nice’.

In last week’s episode of the Rock’s Backpages podcast, we welcomed special guest James Fox, author of 1982’s bestselling White Mischief and the man who, 10 years ago, made Keith Richards’ Life one of rock’s outstanding autobiographies. James talked us through his long and distinguished career as a journalist in Africa, and as a features writer during the golden era of The Sunday Times Magazine. He described how his friendship with “Keef” was cemented by the pieces he wrote for that publication about the Rolling Stones in 1973 and 1976, answering his hosts’ questions about the great man’s rhythm guitar playing.

The fantastic Mr. Fox also offered his perspective on Little Richard, whose death last week prompted discussion of the gay black southerner’s explosive role in the birth of rock & roll. We heard a clip of the sometime Mr. Penniman speaking in 1985 – as well as one of the late Betty (‘Clean Up Woman’) Wright owning up to being a shameless show-off in 1978. James was on hand, too, to reminisce about the importance of Moe Asch’s legendary Folkways label – as revisited in the week’s new audio interview, a conversation with folk elder Pete Seeger conducted by Tony Scherman in 1987. Clips followed of Seeger talking about Asch and recalling Folkways legends Lead Belly and Woody Guthrie…

It was a hoot.

50 YEARS AFTER his landmark Sound of the City was first published (and a decade since his death), Rock’s Backpages remembers the great Charlie Gillett: listen to Bill Brewster’s 1999 audio interview with the writer, broadcaster and label-owner, and read Alex Ogg’s long conversation with him from 2008. Plus RBP writers pay heartfelt tribute after Charlie’s passing in March 2010… mine was as follows:

NO ONE COULD overstate the importance of The Sound of the City, the first significant attempt to make sense of the tangled genealogy of American popular music. Acquired in a Pan paperback edition circa 1974, the book was my portal to the history of myriad music genres, record companies, and assorted behind-the-scenes protagonists.

I never imagined I would one day meet The Sound of the City‘s author, let alone play football with him – along with a motley band of Africans and Latin Americans – on Clapham Common. I shan’t ever forget Charlie’s lithe 60-year-old frame in those games. Though he rarely crossed the halfway line, he patrolled his defensive beat like a man half that age. Which makes it that much harder to comprehend how he has now gone: he should have lived into his nineties.

Charlie was one of the elders, a man of true integrity and unceasing curiosity. His love of soul and swamp music laid tracks for me and many others. He was so helpful and encouraging when I set to work on my first book, a study of “country soul” (the term came, ironically, from The Sound of the City). The love of southern singers and storytellers was a passion we shared for years, culminating for me in the night he brought Dan Penn, Allen Toussaint, Joe South, Guy Clark and the late Vic Chesnutt together on the same South Bank stage. When I strayed outside of that orbit he sometimes seemed nonplussed. I’m not sure he ever forgave me for sullying his “Radio Ping Pong” show with what I’m sure he heard as the antiseptic jazz-funk of Steely Dan’s ‘Babylon Sisters’.

Though Charlie’s evangelising for world music prodded me to invest in sublime albums by everyone from Youssou N’Dour to Salif Keita, I always felt slightly guilty that I hadn’t – through sheer laziness – wholly converted to the world music cause. Typically the last communication I had from him was a testy email about the long list for RBP’s best albums of the Noughties. “What an embarrassing, disgracefully white and inbred list this is,” he fulminated. “Reminds me of the NME Top 100 albums back around 1972 when only two black albums made the list. Have we really not moved on even by an inch to embrace the rest of the world?”

Thanks to you, Charlie, we have.

Two weeks ago, ever-entertaining Pet Shop Man Neil Tennant came into the Rock’s Backpages “cupboard” to look back on his time at Smash Hits magazine — and explain how he became pop’s ultimate poacher-turned-gamekeeper.
Neil talked about mid-’70s London and about interviewing a pudgy Marc Bolan for Marvel UK. He recalled the laughter and irreverence of his 1982-85 stint at Smash Hits before the Pet Shop Boys shot to No. 1 in Britain and then America. After hearing clips of himself speaking to Steven Daly in 1996, he attempted to explain the longevity of the PSBs but took issue with the term “national treasure”.
Mark Pringle (left) & I also paid tribute to the late Andrew Weatherall as we heard a clip of the legendary DJ/producer/remixer talking to DJ History‘s Bill Brewster in 2009. Neil offered his perspective on the evolution of the UK’s club culture through the ’90s, then pitched in as Mark guided us through highlights of the week’s new library additions. Discussion followed on Hawkwind’s topless dancer Stacia, Michael Watts’ 1976 dinner with Laura Nyro and the 10th anniversary of Manchester’s Haçienda club…

In this week’s episode of the Rock’s Backpages podcast, Mark & Barney welcome the wonderful Laura Barton and learn all about her career as a star Guardian writer – and as an author and broadcaster.

Laura talks about her travels in America, and about working with photographer Sarah Lee on the newly-published collection West Of West. The hosts ask her about her pieces on Bon Iver, Daniel Johnston and Riot Grrrl power – and more generally about her deeply personal approach to music writing.

A new Sam Cooke box set prompts a conversation about the pin-up gospel star who crossed over to become an icon of “proto-soul” before his shocking and tragic death in 1964. A 2010 hymn to Sam by the legendary Lenny Kaye provides the platform for ruminations on the man’s sublime voice and his immeasurable influence on everyone from Otis Redding to Rod Stewart.

A clip from the late Andy Gill’s 2005 audio interview with ex-Belle & Sebastian member Isobel Campbell is the catalyst for a discussion of the latter’s collaborations with brooding grunge survivor Mark Lanegan. Having interviewed the Scots singer-songwriter when the duo’s Ballad of the Broken Seas came out in 2006, Laura helps to place the pair in the tradition of such “beauty-and-the-beast” hook-ups as Lee Hazlewood & Nancy Sinatra.

Mark talks us through highlights of the week’s additions to the RBP Library, including pieces on the unsavoury Jonathan King, the fabulous Freddie Mercury and David Bowie’s personal tour of his London landmarks. The episode concludes with discussion of the Rock & Roll Hall of Fame‘s just-announced Class of 2020 – with specific reference to the covert racism (not to mention misogyny) underpinning reaction to the inclusion of Whitney Houston… 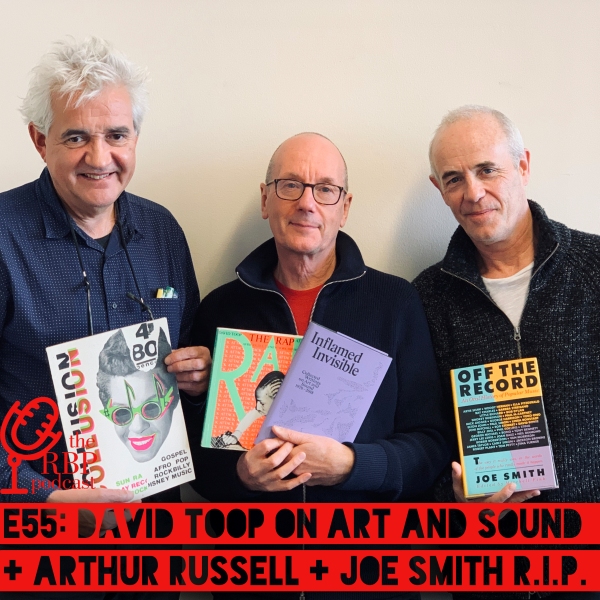 IN THIS WEEK’S episode of the Rock’s Backpages podcast, Mark Pringle & I invite writer and fearless musical improviser David Toop to reminisce about his work and his long and fascinating career. David’s new anthology Inflamed Invisible has just been published by Goldsmith’s Press.
Toop talks about the impact of an aunt returning from New York with a stack of rhythm & blues 78s – and how this instilled a lifelong love of African-American music. After he describes his early adventures in free and improvised music, his hosts ask how a man who’s collaborated with Brian Eno and Max Eastley came to profile Bros for The Face – by way of his pioneering 1984 book The Rap Attack, the first serious study of the East Coast hip hop scene. The three men then discuss the cult “disco auteur” Arthur Russell, whom Toop interviewed.
Toop pitches in on the subject of the week’s free feature, cult dubstep star Will “Burial” Bevan, with Barney waxing ecstatic about the man’s noughties albums and subsequent Hyperdub tracks – and Toop making slightly more sceptical noises.
Mark intros the week’s new audio interview, with the late Joe Smith, and we hear a clip of the veteran West Coast executive discussing Joni Mitchell, one of the many artists he worked with at Warner Brothers and Elektra/Asylum. After considering Smith’s role in the rise of acts like the Grateful Dead, Toop confesses to a surprising penchant for Crosby, Stills & Nash, prompting a more general discussion of dismantling musical hierarchies.
Finally, Mark talks us through his highlights among the week’s new library articles, including pieces on the Four Tops (1966), Mott the Hoople, with David Bowie on backing vocals (1972) and the late Luther Vandross (1985) – another artist Toop interviewed for The Face.

My Tweets
Join 81 other followers