Blue is the Colour: the legendary Barbara Charone on the RBP podcast 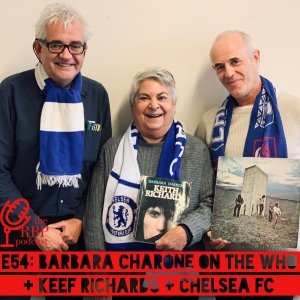 In the new episode of the Rock’s Backpages podcast, Mark Pringle (left) and I welcome music scribe turned PR legend Barbara Charone to the RBP “cupboard” (© David Hepworth) and ask her about moving to London from her native Chicago in 1974 – along with her experiences of interviewing the Who, the Stones and other superstars of the ’70s.

“BC” talks about befriending Keith Richards and writing his biography while staying at his Sussex home, Redlands, then reminisces about her move into PR and her decades-long association with such clients as Madonna and Robert Plant. Finally, Mark & Barney ask Barbara how she came to support the team they all three (and Jasper!) adore: Chelsea FC. (Spurs fans may wish to fast-forward at this point.)

The conversation segues seamlessly into a discussion of the week’s fascinating new audio interview, in which John Tobler asks Pete Townshend about his 1993 solo album Psychoderelict – and all about the Who, Tommy and Pete’s childhood traumas.

After semi-skirting around the week’s free feature on Coldplay – an act for whom none of the three can muster much enthusiasm – Mark takes the reins and talks us through his highlights of the week’s new additions to the RBP library – including a report of the 1966 scrapping of seminal TV pop show Ready, Steady, Go!, a review of the opening date of Led Zeppelin’s 1975 tour of America, and a 1977 Rolling Stone interview with the ‘Clean-Up Woman’ woman Betty Wright.