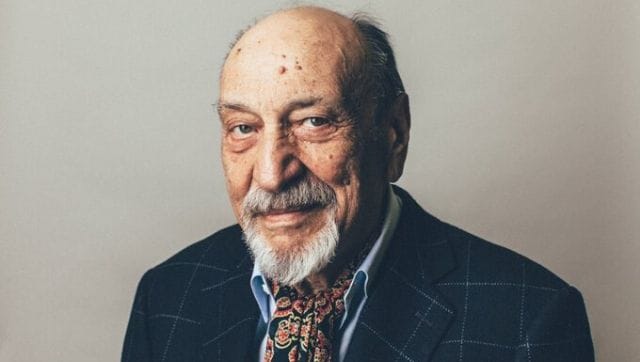 I WAS SAD to read of the passing of the great Milton Glaser, even if he had reached the august age of 91. He was gracious enough to grant me an interview for my Woodstock/Bearsville book Small Town Talk, so I thought I’d post the salient quotes I extracted from our conversation back in 2013. He was a lovely man and had some valuable insider insights into that “strange man” Albert Grossman…

“Woodstock always had a kind of modest cultural history. It had a population of modest artists, some more credible than others. In those days the artist colony was a glamorous thing, but only at a distance. As you got up close it was just like any other poor town in the Catskills.

“We started going up there because it was a cheap place to go and because there were occasional art galleries and things to see. We first went up about fifty years ago, mid-to-late ’50s. We stayed with friends who’d bought a barn, and we used to sleep in the corncrib. It was always an attractive place that never quite got chic, for reasons that we didn’t fully understand. It was the kind of anti-Hamptons. Certain people at the extremities of the arts felt an affinity for the place and would go up there, but it hadn’t quite coalesced into anything discernible.

“We used to drive up in a little yellow Volkswagen. We started renting over the summer for a couple of years, and then one year I tried to see if we could operate the studio from Woodstock. Push-Pen Studios. There’s even a picture of us somewhere. And then a year or so later we found our present house on Lewis Hollow Road, which we bought for $18,000. And it came with 80 acres of land, but the land was considered so worthless in those days. It had belonged to an artist named Bruno Zinn [Zimm?] The area was known for having rattlesnakes, so no one wanted to be up there. Friends would come up from the city. Most of our friends were weekenders. This kid in the local supermarket told Shirley about the Striebel house, and we didn’t know a single person that had $50,000 except for Albert [Grossman].

“Albert had seen or heard of my work, and he called and asked if I would do some work for him. The first thing he did was ask us if we would like to go to a concert in a club. He had just spoken to a group that he was considering putting together, and he wanted our opinion. So Shirley and I went to the Café Wha?, I think, and it was Peter Paul & Mary’s first appearance, and shortly after he signed them as a group. Peter moved into the same building where we lived on West 67th Street. And then we started working regularly for Albert. We got to know The Band and Janis.

“Albert was a strange man, but I genuinely liked him and we had a very intimate relationship compared to most professional relationships. He was a curious mixture of aggression and shyness. In some cases he was so withdrawn, and in other cases he would just bully people into submission. Sometimes when people come from Chicago they feel very intimated by New York, and with him there was certainly a kind of estrangement. He was not adept at social occasions, even though he was always in the midst of hundreds of people and organizing things.

“Shirley also heard about the house that Dylan bought on Camelot Road, so you might say she’s totally responsible for everything that happened to Woodstock.

“We drove up to Woodstock on the night the festival began, and there were at least fifty people walking up Mill Hill Road looking for the festival site.

“Albert started the Bear, which is still one of the few decent places to eat anywhere in that area.

“It’s interesting that the town never became self-conscious about the musical component, or about the fact that so many famous musicians of the time were there either regularly or from time to time. There was no sort of cool place to be, no gathering spots, unlike in the Hamptons. The town is very dissipated. You can live in that town without knowing anyone. There’s no social scene of any kind, no group of cool people. There were all these artists, but they always lived at the extremities and they were there because it was so cheap and they were not part of regular events that were occurring. There was no sense of a weekend calendar like you had in the Hamptons. That’s what has saved the place for us – that there’s nothing to see and nothing to do! It was a place where people could do their work, as opposed to benefiting from your notoriety and money wanting to be part of a visible community for whatever egocentric or financial gain there was. Also, there was no class distinction. If you had money it was irrelevant because there was no way to display it. If you had a big car you kept it outside like everybody else. Most people went there to disappear, and that’s why we went there. Something preserved that town so that it was never really transformed.

“Albert was essentially reclusive. He came up to disappear too. Every once in a while, he used the house to entertain, but mostly he used it to isolate himself. Of course, he was carrying out some business, because a lot of people like The Band were up there.

“John Court would often come by this office with something Albert had given him to bring.

“I was always very touched by Albert, partly because he always had this reputation of being a tough guy and a big power in the music world, whereas on a personal level he was always very kind and sweet to me.

“I did albums after albums, and some nice work that I’m pleased with.

“Albert had no direct reason why he would be interested in Bearsville, outside of the fact that people often called him bear-like. The fact that the Bear still exists, and that the theatre was built, is really impressive. As a place, neither the restaurant nor the theatre are really appreciated.

“There was a period in the artistic community where hard drinking and that kind of ruffian-like artist behavior existed, but it sort of disappeared.

“There’s still an unspoiled bucolic sweetness about the place. We always compare it to our friends in the Hamptons who are busy all the time and where the idea of a protective enclave doesn’t exist anymore. I think that’s one of the reasons Albert went there. He hated that kind of social activity, it wasn’t natural for him. And he was not impressed by people who had a lot of money.”

One thought on “The late Milton Glaser on Woodstock, N.Y.”

My Tweets
Join 81 other subscribers